2021 Honored Clan & Chieftain of the Games

Matheson comes from the Gaelic MacMhàthain, "son of the bear", not "son of Mathew". The first recorded chief was Kenneth MacMhàthain, traditionally Constable of Eilean Donan Castle - then a huge sea fortress - at the head of three great sea lochs: Loch Long, Loch Duich and Loch Alsh.  Kenneth is recorded as a major war leader in both the Chamberlain Rolls and the Norse account of the expedition of King Haakon IV against Scotland in 1263 which culminated in his defeat at the Battle of Largs.

The Mathesons fought for Donald of the Isles at Battle of Harlaw in 1411.  Alasdair mac Mhurchaidh, Clan Chief and warlord of 2,000 men, was arrested by King James I at Inverness in 1427, along with other Highland chiefs.  Alasdair and four sons died in the battle of Cnoc na Catach in 1438.    Although the record is silent on the immediately subsequent years, a probable son, Iain Dubh Matheson the Elder eventually succeeded to the Chiefship.  Iain was followed by his son, Iain Dubh Matheson the Younger, Constable of Eilean Donan Castle.  Iain was killed in 1539 defending the fortress against the Macdonalds, allies of his cousin and rival claimant for the chiefship, Murdoch Buidhe.

After the death of another brother of Iain, Dugald Ruadh, Murdoch Buidhe’s claim to the chiefship was unchallenged.  Murdoch Buidhe’s son, Roderick of Fernaig, succeeded him as chief.  Roderick was followed successively by three Johns, son, grandson and great grandson.  The great grandson, John (Iain Mor) Matheson, bought land on the Black Isle (East Suddy in 1688 and Bennetsfield in 1697) and with his family left Lochalsh.  The Chiefship of the Mathesons remained with the family of the Mathesons of Bennetsfield until 1975 when the then Chief, Colonel Bertram Matheson of Matheson MC died without issue.

Meanwhile, Iain Mor’s nephew, Farquhar, took over Attadale and his successors continued to hold land in Lochalsh until Attadale was sold in 1825 by John Matheson, IVth of Attadale.  John's eldest son was Alexander Matheson (b. 1805) (later of Ardross and Lochalsh), a 6 x great grandson of Roderick of Fernaig and great grandfather of the present Chief.   Alexander went to China to join his maternal uncle James, a Matheson of Shiness and a founder partner in Jardine Matheson & Co.  On his return to Scotland in 1841, Alexander started to buy land in Ross-shire.   In 1851 he recovered the ancestral Lochalsh estate, including the ancient crannog on Loch Achaidh-na h-Inich.

Records from the 15th century onwards show that the Mathesons of Shiness in Sutherland played their part, alongside Mackays and Gunns in the feuds between the Earls of Caithness and the Earls of Sutherland.  From the Mathesons of Shiness came Sir James Matheson, 1st and last Baronet of the Lews.  With Dr William Jardine he founded the mercantile house of Jardine Matheson & Co which traded primarily in India and China.  On returning to Scotland he bought the Isle of Lewis in 1844, and was created Baronet of the Lews in 1851 for his singular exertions and generosity in alleviating the sufferings of the island during a period of famine.

Today, descendants of Lochalsh and Sutherland (Shiness) Mathesons are to be found in many overseas countries, particularly in Australia, Canada, New Zealand, Norway and USA.

Cheiftain of the Games

Sir Alexander was born on 26th August 1954.  He joined the Army in 1973, serving in the Coldstream Guards for 28 years until 2001.  He saw service in Great Britain, Northern Ireland, Belize, Cyprus, France, Gambia, Germany, Guatemala, Hungary, Morocco, Panama, Senegal, and the USA.  His postings included Adjutant of the Royal Military Academy Sandhurst, Chief of Staff of British Forces Belize, Brigade Major of the Household Division and Commanding Officer of the Oxford University Officers Training Corps.

From 2001-2005 he was the Executive Director of BSES Expeditions, an established youth development charity based in the Royal Geographical Society, London.  The charity achieved its aims by sending volunteer-led scientific expeditions to remote parts of the world.  These expeditions took him to Chile, Peru, Lesotho, Iceland and Tanzania.

From 2005-2014 Alexander served in the Household of Her Majesty Queen Elizabeth II, being responsible for the department which deals with public honours & awards, and the various ceremonies which surround them.

During this time he was also a member of the Government’s Honours & Decorations Committee and of the Royal Mint Advisory Committee. 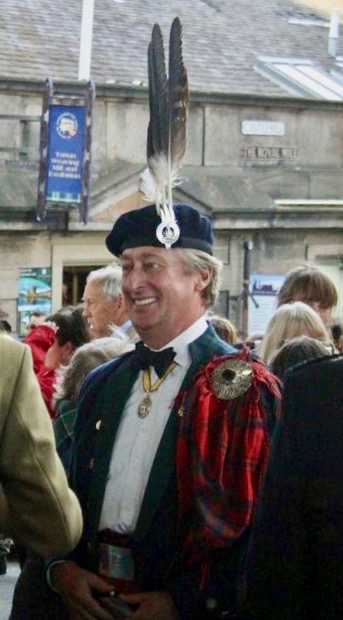 Alexander is the 28th Chief of Clan Matheson and the 8th Baronet of Lochalsh, succeeding his father Fergus who died in January 2017.  He married Katharine, a university lecturer in law, in 1983.  They have three children:

Alexander lives in England but has a house on the Isle of Skye which occupies a good bit of his time.  He is also a Gentleman Usher to The Queen, an Extra Equerry to The Queen and a Deputy Lieutenant for the county of Berkshire.

Most of them are attending the Grandfather Mountain Highland Games in 2021.